Sharon shared an excerpt from this memoir with the audience at Toronto’s Draft Reading Series. 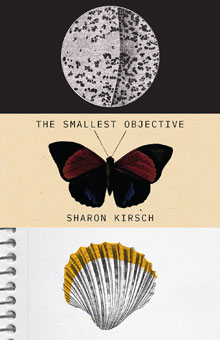 Confronted with her mother’s memory loss, a daughter undertakes a search for buried treasure in her now-vacant family home, aided by a team of archeologists. This first-person narrative produces unsettling discoveries about several Montreal personalities as revealed by the objects that survive them—a microscope and lantern slides, a worn recipe book, the obituary of a renowned black sheep in the family. In the end, the excavation of the narrator’s childhood home yields both less and more than she ever imagined.

In the excerpt below, the narrator stands by as the team of archeologists employs ground penetrating radar (GPR) to search for objects beneath the floor boards of her family home. The GPR consists of a scanner guided along a search area overlaid with a grid, along with a monitor exhibiting the corresponding images.

From Chapter One: “Treasure”

John sat cross-legged in front of the monitor surveying the images and manipulating the controls as Blake slowly traced each of the lines with the scanner. On the upper right of the monitor was the grid number, and below it a representation of the grid itself, with numbers assigned to each line on the vertical and horizontal axes. Not so for the opposing side. The image on the left was as fluid as the other was rigid, as fugitive as the other was declarative. Here, John explained, we were looking into a cross-section of the floors and joist-space that corresponded to a precise point on the adjoining grid.

The hardwood floor and subfloor I could recognize at the top of the image as the two dark bands set apart by a margin of light. Beneath these defining lines, the shapes were more amorphous, the blacks and whites confused in shades of grey.

“This may be a nail,” John said, pointing to a sequence of thrusting broken lines, “and this,” he motioned toward a blackness scattered with almost-familiar pale shapes, “is air.”

Available as an e-book on Amazon.com and Kobo.com, and in print from New Star Books, Ben McNally Books, and Amazon.com

Sharon reading from The Smallest Objective

Animals Out of Turn: In subTerrain

“Animals Out of Turn” is a textual and visual record of the scarcely noted animal representations around us. Dedicated to an individual species, each short text is inspired by an image encountered on the author’s somewhat haphazard travels—her impulsive, non-seasonal migrations. The species participating unwittingly in this menagerie give evidence of how animals are both plundered and immortalized by us.

An illustrated excerpt from this larger work in progress is published in subTerrain Magazine’s nostalgia issue (#75). 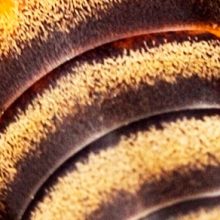 From “Pollinator in Relief” (Bee)

The bee doesn’t lend itself to inauthenticity. Whereas the patterning of the leopard or tiger, the ermine or ocelot, adorns faux fur jackets, slippers and pajamas, imitation bee has less cachet. And yet the small intricacy of the bee inspired curiosity as early as the seventeenth century, while honey, the bee’s production, was thought to bestow eloquence, delight and eternal life.

Let’s begin not with the egg but with the chicken. Chicken fried or barbecued, butter chicken, Chicken Kiev or Chicken Tetrazzini, drumsticks, nuggets—all presume the essential blandness of the chicken, all are, in essence, chicken baloney. Chickens, understandably, never take one another for bland. They recognize the faces of up to 100 friends and family. The first of the eggs laid by a brood hen establishes her imprint, a hue peculiar to her for her entire life.

What Species of Creatures is:

In six essays, this work of creative non-fiction introduces the reader to a French and British literature of “discovery” that’s alternately startling, cruel, comic and adulatory. Seventeenth- and eighteenth-century personalities roam the New World landscapes of Acadia, New France and Rupert’s Land, their encounters with unfamiliar animals conveyed through extended anecdote. The book borrows from vivid traditions of animal writing—the fable, children’s stories, classifications by naturalists and even merchandise lists compiled by the Hudson’s Bay Company. Although rich in historical detail, What Species of Creatures reflects present concerns, challenging us to consider our own place in the hierarchy of beasts. 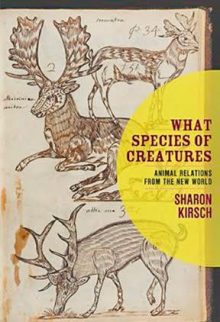 From What Species of Creatures

The following excerpt comes from the chapter on the hummingbird, a species unfamiliar to the Europeans and celebrated for its wondrous traits:

“Smallest of” and “little bigger than” were favourite phrases for reckoning with the improbable size of the hummingbird. The Acadian lumberman Nicolas Denys, writing in the seventeenth century, notes that the ruby-throated hummer “is a little bird no larger than a cockchafer,” a large beetle. … the Récollet friar Gabriel Sagard, not satisfied with the bird’s diminutive size, shrank it further: “The body of this bird is no bigger than a cricket.” Sieur de Dièreville bettered him still. The French surgeon, who set sail for Acadia in 1699, declared the bird’s “minute body” to be “no larger than the tip of a Child’s finger.”

Praise For What Species Of Creatures

“A writer doing a strain of cultural anthropology she may have invented all on her own. … There’s something remarkable and unsettling going on here. … The result is fascinating and informative. … tremendous fun to read.”
—Brian Fawcett  dooneyscafe.com, March 22, 2009

“The author’s own background as an accomplished travel writer, coupled with an irrepressible wit, brightens the pages and delights the reader time and again … a new, forgiving, and creative way to look at the human-animal adventure. It’s bound to make you smile.”
—B.L. Anderson  The Ark Journal (U.K.), Summer 2009

“A lively—and deadly—chronicle of first encounters between the New World’s early settlers and this continent’s lesser beasts. Seldom has scholarship been served up with such delectable charm and saucy wit. An original—I loved every page.”
—Sylvia Fraser, writer

“Intriguing . . . an incisive, passionate challenge to us to re-examine our relationships with the other animals, who (yes, who) maintain their precarious existences alongside the juggernaut of humanity.”
—Dania Sheldon, Vancouver Review, Spring 2009